The Death Watch of Matriarchy

GitHub joins Twitter on the death watch:
“anti-harassment tools” means find new ways to attack men. It can’t have anything to do with actual harassment since no one has provided any evidence (much less even made the claim) that harassment is a problem at GitHub”

STEM in the feminist countries will decline relative to STEM in cultures that do not suppress their male populations. This is what matriarchy does – suppress male populations – not only in STEM but across the board.

The looming matriarchy in the West is revealing itself to be as destructive a force as the human race has ever faced, threatening the survival of the species. Unbridled matriarchy would remove the fundamental building blocks whereby nature brought humanity into being.

Women in India are eagerly embracing the misandry introduced to them by white women. It remains to be seen if white feminism can turn the women of China too against their fathers and sons. The fact that group-bias is heavier in women than in men ensures that once misandry gets established, it becomes more and more extreme until it drags humanity towards all-out matriarchy.

HAS MATRIARCHY EVER THRIVED ON EARTH? COULD ANYTHING GOOD COME OUT OF IT?

MATRIARCHY NEVER THRIVED ON EARTH
The worship of female dieties does not by itself make a Matriarchy on the ground. There is no record of any matriarchal society that was successful enough or long-lasting enough to be significant.

“[T]he existence of prehistoric matriarchies meant everything to the women I met through my study of feminist spirituality. In both conversation and literature, I heard the evangelical tone of the converted: the theory of prehistoric matriarchy gave these individuals an understanding of how we came to this juncture in human history and what we could hope for in the future. It underwrote their politics, their ritual, their thealogy (or understanding of the goddess), and indeed, their entire worldview…

Theoretically, prehistory could have been matriarchal, but it probably wasn’t, and nothing offered up in support of the matriarchal thesis is especially persuasive.” (The Myth of Matriarchal Prehistory
Why an Invented Past Won’t Give Women a Future
By CYNTHIA ELLER )

It’s trying to happen all around us. The signs of the Western world’s slide into matriarchy are signs of an aptic urge to destroy society itself.

SIGNS OF MATRIARCHY (the italicized parts represent the matriarchal undertone):

Feminists and SJWs ignore or excuse the rapacity of Muslim men (we refuse to accept that there’s anything as bad as, let alone worse than, our fathers and sons)

The use of Police to persecute citizens who try to protect themselves when the State fails to do so (We stand with the enemy against our fathers and sons. The enemy of our enemy is our friend)

We’d rather have rapists than our fathers and sons: 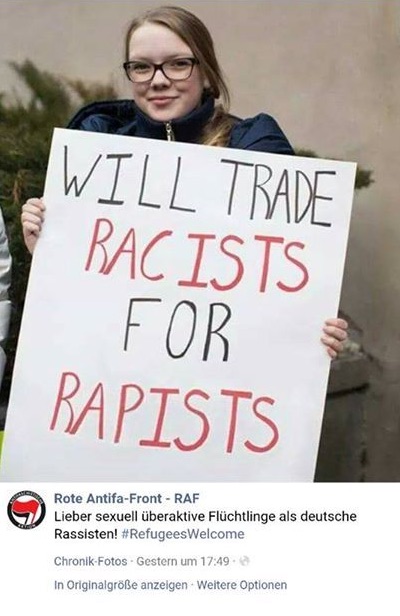 We will reduce our fathers sons to a pathetic spectacle:

Attempts to destroy procreation (an aspect of the aptic urge to destroy society itself):

COULD ANYTHING GOOD COME OUT OF MATRIARCHY?

Every year the excesses of feminism become more outrageous and extreme, and matriarchy looms ever closer. How can human beings, supposedly an intelligent species, allow this to happen?

Matriarchy, not Patriarchy, is the real blight on humanity. Humanity (especially white humanity, it seems) harbors matriarchy like a deadly extinction gene. The only reason it did not destroy humanity long ago is that nature placed males as protection against it. Some males have never tolerated behavior that would lead to female tyranny. Now, the more the white female emasculates the white male, the more she exposes the need for her excesses to be contained by the checks and balances nature had put in place. Women are more group-biased than men (collective strength); men are stronger and more aggressive than women (individual strength). The galloping insanity of today’s feminist world throws the unnaturalness of male subservience into sharp relief.

THE FAILURE OF DEMOCRACY
Is the human race very bright? In general, we’re not smart enough to realize how ridiculous we can be. If the manginas and sycophants of today are anything to go by, the men who kept matriarchy in check were probably a minority of the male population. Thanks to democracy, those men are easily out-voted and out-lobbied today.

It is ironic that man’s creation of democracy has given matriarchy the tool to drive humanity to extinction.

For matriarchy in action we can look at Bonobos, who provide a parody of the Western world of today.

Female Bonobos have been observed biting off male penises

In Bonobo societies “The power balance in favor of females creates a context that supports female abuse of males. These data on female violence contradict Thornhills’ hypothesis that violent behavior in males is an evolved, sex-specific behavior.” (Harway and O’Neil)

After the fall of the Soviet Union, “with all threats neutralized the West could safely purge itself of masculinity just like the Bonobos [in their plentiful environment, protected by a river from the more sexually dimorphic Chimpanzees] had done. The problem again is that this breeds weakness, and worse, it’s built on lies.

The abundance of the West is built on the labor and inventiveness of men, not simply the provision of nature. When you attack and purge masculinity from a culture, you… eliminate the leaders, the inventors and the geniuses.” (Turd Flinging Monkey. The words between the square brackets were added by me)

THE REASON FOR THE HATRED?

As I stated at the beginning, this is just AN INTERPRETATION OF THE PRESENT AND THE FUTURE (IF ANY) THAT AWAITS US. Having had a very close relationship with a lot of women and girls from an early age, it seems to me that some women lack the “extinction gene”, or have conditioned themselves out of it. By the same token, it seems that a lot of men (sycophants and manginas) have conditioned themselves into it.

Matriarchy will probably kill the civilization that white men built. Ironically, it will be a bad day for white women when that happens. Matriarchy is more likely to replace enlightenment with darkness than wipe out the entire human race.

180 comments on “The Death Watch of Matriarchy”