A book that has had a particularly large impact on me is this one, 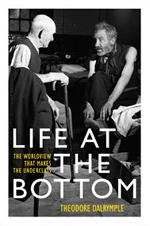 Every person has a world view.  It is just a question of what it is.  In my case, it it an INTX driven reality based logical one.  And as such, I have always had trouble understanding why other people think and behave the way that they do.  Yet, often these seemingly inexplicable attitudes and behaviors make sense if one considers the subject’s world view.  Dalrymple first focuses on what a world view is,

Human behavior cannot be explained without references to the meaning and intentions people give to their acts and omissions; and everyone has a Weltanschauung, a worldview, whether he knows it or not.  It is the ideas that my patients have that fascinate — and, to be honest appall me: for they are the source of their misery.

And then he explains how it works for the underclass.  A large part of their world view is of being victims that are helpless,

The idea that one is not agent but helpless victim of circumstances, or of large occult sociological or economic forces does not come naturally, as an inevitable concomitant of experience.  On the contrary, only in extreme circumstances is helplessness directly experienced in the way that blueness of the sky is experienced.  Agency, by contrast, is the common experience of us all.

World views of the underclass are often of convenience, accepted because they “feel good”, are self-serving and authorities say that they are true.

The contrary idea, however, has been endlessly propagated by intellectuals and academics who do not believe it themselves, of course, but only of others less fortunately placed than themselves.  In there is a considerable element of condescension: that  some people do not measure up fully to the status of human. The extension of term addiction, for example, to cover any undesirable but nonetheless gratifying behavior that is repeated, is one example of denial of personal agency that has swiftly percolated downward from academe.

In fact most of the social pathology exhibited by the underclass has its origins in the ideas that have filtered down from intelligentsia.  Of nothing is this more true than the system of sexual relations that now prevails in the underclass, with the result that 70% of the births in my hospital are now illegitimate.

Literature and common sense attest that sexual relations between men and women have been fraught with difficulty down the ages precisely because man is conscious social being who bears a culture, and is not merely a biological being.  But intellectuals in the twentieth century sought to free our sexual relations of all social, contractual, or moral obligations and meaning what so ever, so that henceforth only raw sexual desire itself would count in our decision-making.

The intellectuals were about as sincere as Marie Antoinette when she played the shepherdess.  While their own sexual mores no doubt became more relaxed and liberal, they nonetheless continued to recognize inescapable obligations with regard to children, for example.  Whatever they said, they did not want a complete breakdown of family relations.  If anybody wants to see what sexual relations are like, freed of contractual and social obligations, let him look at the chaos of the personal lives of members of the underclass.

But of course, not all world views that are of the underclass.   There are middle class views, upper class vies, liberal views, conservative views, etc.   They all try to explain the world (and the more successful ones take into account the issues of human nature).

The take-away is that everybody develops a world view (often with outside help).  And these are often internally mostly consistent.  But that does not mean that they model the world effectively, for often their basis is mostly wrong (e.g. feminism).  And poor world views cause problems for everyone.

So as Lenin asked, “What is to be done”?